A recent article, “Drawing the Line of Asset Bloat” by Russel Kinnel published in Morningstar magazine examined the effect of swelling asset size on mutual fund performance. Kinnel highlights several anecdotal examples of how growing size of a mutual can significantly impair the fund’s future returns including the infamous Fidelity Magellan Fund. Having researched this issue before, I was intrigued to see it show up again. In short, during the fund’s prime, it was able to outperform the US markets on a consistent basis. However, after collecting billions of dollars inflows and swelling to over $100 billion in Assets Under Mangement, alpha all but disappeared. 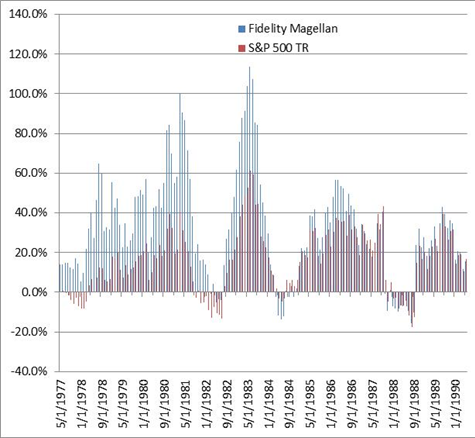 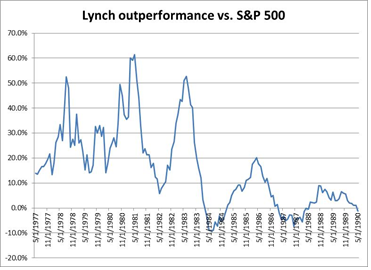 Notice over time as the fund grew in size how the alpha on the fund sank closer and closer to 0.

How can this happen? A 2004 paper “Does Fund Size Erode Mutual Fund Performance; The Role of Liquidity and Organization” published in the American Economic Review took on the task of explaining this decline in performance due to growing asset size. Utilizing advanced econometric techniques, Princeton professors Chen, Hong, Huang and Kubik tested several theories on liquidity, organization and management to explain the strong inverse correlation they discovered.

Conclusion: There is a material and statistically significant inverse correlation between Assets Under Management and lagged fund performance. In other words, as fund size grows fund performance in future periods is negatively affected.

Investors in the mutual fund industry have anecdotally observed this for years. Funds thrive near their inception when Assets Under Management are small and easy to manage. After a few years of solid performance the 3-year return numbers are published and investors jump on the band wagon. Assets Under Management explodes and alpha shrinks. But why? According to their studies;

1)      Liquidity is a significant factor in explaining this inverse relationship. High liquidity spaces are much less affected by large capital constraints. Therefore, mutual funds with a mid or large cap mandate can handle increased fund size without significant diminishing performance.

2)      Funds with a “small cap” mandate outperform their mid and large cap counterparts by an average of approximately .5% per year.

3)      “Hierarchy costs” are also a significant factor in explaining why fund size and fund performance are inversely correlated. Essentially, on large management teams, the competition between analysts to get their ideas implemented into the strategy leads to a reliance on hard data (quantitative). Because hard data is easier to illustrate, less emphasis is placed on soft data (qualitative, such as management evaluation).

If you have any questions on the techniques and tests run to produce these conclusions feel free to email me at stephen@globalviewinv.com.

To get deep into the numbers of this study you can find the full paper at, http://www.princeton.edu/~hhong/AER-SIZE.pdf