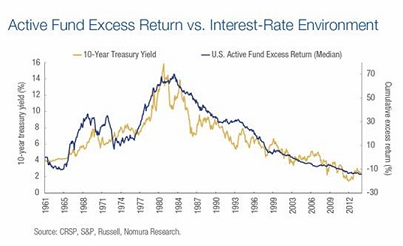 Prepare for Trumpflation (but it might take longer than you think)

“In the short-run the stock market is a voting machine, in the long run it is a weighing machine.”

We shouldn’t underestimate the significance of Trump winning the election on portfolios over the next several years. But because it will take time for these policies to be implemented, we also shouldn’t overestimate any short-term impact this will have on the economy (positive or negative) or investment portfolios.

One thing is clear. Investment managers we admire are in consensus that President Trump will cause rates to rise and higher inflation.

Because active managers have historically done best (relative to indexes) we believe this bodes well for our portfolios. Which means investors in indexes (and closet indexes like in 401ks) may be left behind.

The economy and stock prices will be affected by these changes in policy. While it is not yet certain exactly what these policy changes will be, we do have a general direction. More infrastructure spending, higher interest rates, less regulation. Which means this will probably good for stocks and bad for bonds.

Because rising rates have historically been good for active managers, now more than ever is a time to make sure you (and those you love) are invested with active managers with skin in the game instead of in indexes.

The night of the election the market plummeted until the uncertainty of the winner was resolved. By market open on Wednesday, the US stock market was rallying and the bond market fell. The single most important move was in long-term government bonds. Because the market realizes an infrastructure bill is more likely, safe (government) bond prices fell more than they have in years. The bond market voted quickly. Data here is as of 11/17/2017.

The good news is that our active managers have nearly all fared better than indexes. Corporate bond funds are flat to down 1%, medium risk managers are about flat, and high risk managers are generally down 2% to up 3% depending on international and emerging markets exposure.

Because active managers have historically done best when interest rates rise, this bodes well for our portfolio management style and poorly for a market index (or closet index) based portfolio.

The chart below illustrates how active funds did better than indexes from 1961-1980 (when rates were rising). It also shows that from the early 1980s until recently passive strategies have outperformed. And is a reason so many people now believe passive investing is a viable long-term strategy (those who didn’t read our blog: http://globalviewinv.com/2016/10/401k-fund-risky/ ).

Because for much of this period the broad stock market made a nearly zero return after inflation, investors NOT in active managers should reconsider their investment strategy.

As we observed in our last newsletter, we believe the market is nonpartisan. That, unless “Donald Trump wins and literally does all the outrageous things he says he will do” there will not be an unfavorable stock market reaction. Thus far, this has been right. The more and more we see President Elect Trump in action, the less he resembles Trump on the Campaign. Which means there is cause for optimism.

So, if he can get agreement with Congress to move forward on these plans (and I believe he will) there are portfolio implications. Let’s tackle them one by one. Because we don’t know exactly which plans will be implemented, I will only summarize at this point.

Implications of higher rates and inflation:

This element of Trump’s plan will have the largest immediate effect. Higher interest rates are bad for long duration bonds and other high yielding investments like High yielding stocks like Real Estate Investment Trusts, Utilities, and Master Limited Partnerships.

Because banks can make more money with higher rates this will help them.

Trump has called Obamacare “a disaster” because healthcare has become ironically unaffordable. We cannot know how much healthcare would cost before the Affordable Care Act therefore cannot simply blame the price increase on President Obama. But the fact remains that healthcare is unaffordable. However, Mr. Trump favors less rather than more regulation. Therefore we believe drug stocks will benefit from reduced fear of regulation. Other effects are more ambiguous.

The real fear after Trump’s rhetoric is that Trump will start a trade war. Should this fear manifest it would have wide spreading implications. As a businessman, it is hard to imagine that Mr. Trump truly believes full blown protectionism makes sense. Which means global pundits most likely overstate the degree of protectionism which may ensue.

Because emerging markets and international markets are undervalued, and because mitigating policies have a way of working themselves off, we continue to believe a substantial allocation to overseas Developed and Emerging markets is warranted. We also believe active management is increasingly important.

If President Trump makes good on his promise to “drain the swamp” by limiting lobbyists and establishing term limits, it is our view this will substantially help the economy over the long run. Which means we need to be careful making assumptions that the larger companies who earn higher than normal profits may not continue to do so if those higher profits are based on lobbying and favorable regulation.

While lower taxes (in combination with higher spending) causes deficits and debt to grow in the short run, should effective policies be implemented, higher economic growth will offset this. We are hopeful the growth effect will be higher than the debt effect.