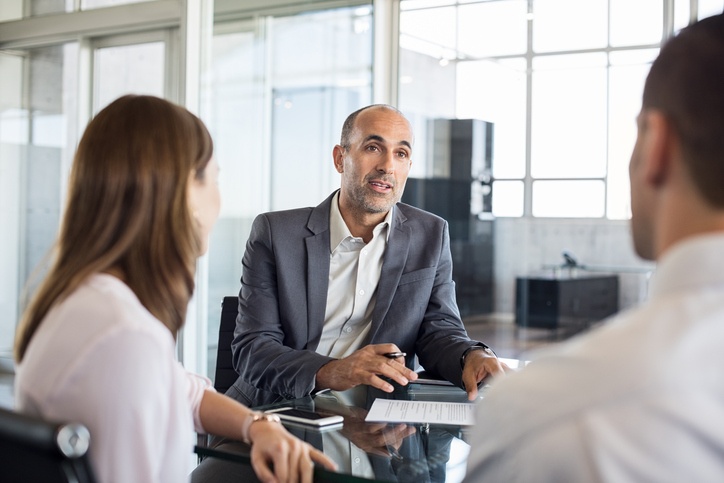 There are many types of investment risk and unfortunately, just as many reasons why investors sign up for it. Here are 3 common reasons:

1. Advisors Know How to Push Your Buttons, Like Using Social Proof

Persuasion is a science. And the big banks and insurance companies know how to use it.

Financial advisors (or at least their bosses at the publicly traded companies they work for) know that investors respond to a principle of influence known as social proof. In order to take advantage of this, they dress well and have fancy titles.

Imagine you know what these fancy titles actually mean.

These titles are literally bestowed based on how much cumulative production credits the advisor has won. When a financial advisor reaches a certain level, he or she gets a “promotion.” Alternatively, they can be given out to suggest that a particular advisor is appropriate for a certain wealth level. However this is done, no consideration is given to other designations that mean a great deal.

There is an alphabet soup of titles. Many of these can be obtained by taking a one-day class and have very low continuing education requirements. For your purposes regarding financial planning and investments, there are two that are useful:

Certified Financial Planner is a designation given by the CFP board, meaning an advisor exhibits a minimum competence in areas including tax, retirement, financial planning, investments and estate planning. This is a rigorous program; so rigorous that many lawyers fail this test the first time because they underestimate its difficulty.

The other useful designation is Certified Financial Analyst. This is considered the hardest designation to obtain. While working on Wall Street, my employer suggested employees obtain either an MBA or a CFA designation.

Lesson: For competence on planning, turn to a Certified Financial Planner. For competence in investing, look to an investor’s track record, experience and training. Excellent investment managers have a CFA, an MBA or years of successful experience as an analyst and portfolio manager. Most other fancy titles don’t mean much.

What was good before probably isn’t any more. Good funds attract attention. And more money. This often causes their downfall.

Asset bloat happens when a mutual fund gets so big that it can no longer be managed the way it was originally intended to be managed. Asset bloat causes an excellent fund to look more and more like an index. So, it generally starts to get the return of an index (less its fee) with all the risk of the index.

Asset bloat is often a tragedy of excellence. Funds that are very good in their younger days perform more and more poorly as they gather assets. There are many examples of this.

Even worse, funds that have historically done very well during periods of turmoil tend to become large and riskier. At the end of 2013, we had a look at the 15 largest funds to determine their risk. We even gave them an ulcer score to measure the combination of the drop and time period before recovery (high is bad).

These funds had an average asset size of more than $117 billion. While there is some disagreement on how big is too big, we feel confident that it becomes increasingly difficult to manage an all-cap equity portfolio at about $20 billion in size. Which means, where possible, we strive to find investment managers smaller than this.

This ulcer analysis is a typical risk analysis we do on prospective client holdings. Because we typically manage our clients’ serious money, we like to avoid 50 percent drawdowns and six- to 12-year recovery periods, striving for drawdowns half of this and recovery periods of two to three years from worst.

3. You Make Decisions Based on Feelings, Not Facts

Followers of the 2016 Presidential Election got the treat of a lifetime. Out of nowhere, a reality TV star and real estate investor came to win not only the Republican nomination but also the race for the 45th president of the United States.

Dilbert Cartoonist Scott Adams predicted that this would happen, that Donald Trump would become the 45th president of the United States – and that he would win in a landslide – in August 2015. Mr. Trump was the first master persuader to appear on the American political scene since Ronald Reagan and Bill Clinton.

Mr. Trump did not win in a landslide (probably due to a compromising video that would have harpooned anyone else), but he did win, surprising many people.

The reason he won is that Mr. Trump is a “master persuader.” Mr. Trump understands the science of persuasion and applies it daily, which means he understands how to use language to stimulate an emotional response and cause a favorable reaction (to his agenda).

The reason this phenomenon exists is rooted in our biology; because we are not logical animals, not Vulcans. We are human beings. And human beings will make human mistakes.

Human beings are not driven by a logical imperative. Instead, we find reasons after the fact to justify why we make important decisions like investment decisions. For example, when the market is going well, we tend to rationalize that it is a good time to invest because other people are investing and they have made a lot of money. And then we invest.

On the other hand, when the market is going poorly, we see others getting out. And then we sell. It is easier to hold cash because it eliminates the worry of losing even more. The problem is that as soon as the sale occurs, the loss is recognized. It’s not on paper any more. Money has been lost that cannot be made back.

There is a biological reason for this. We don’t have a single brain. Instead we have three brains: The forebrain, the limbic brain and the cerebellum. Each brain operates by itself.

All three brains have a different job. The neocortex is the learner. Every time it learns, it strengthens the hardwiring in your brain. Remembering maintains and sustains those connections. These networks have an electrochemical component. This can be mapped with current technology. The mind is the brain at work.

Whenever you have an experience, you have a feeling. This feeling causes your second brain, the limbic brain, to release a chemical. This release stimulates memories associated with that feeling.

Negative feelings, like stress or fear, activate the crocodile brain. Just like seeing a lion would cause you to freeze, so too does uncertainty or the sense of loss. The sensation is not fight or flight. It is freeze, fight or flight. Unfortunately, this is well-known by marketing professionals.

The science of persuasion is well documented and has been used since time memorial by unscrupulous salesman to take advantage of a mark. The big banks, brokerage firms and insurance companies all know how you make decisions. This is a science, and not a new one.

I know that even my “smartest,” “most experienced,” “best educated” clients can even easily fall prey to this persuasion. The reason for this is that when confronted with uncertainty, as human beings, we tend to find something to reduce that uncertainty. Often there is no real answer, so we will find an answer supporting our existing belief systems that seems to reduce the uncertainty.

At Global View, we manage money like we manage our own. We have skin in the game. We aren’t for everyone. But if you are ready to graduate from a big bank or insurance company to a fee-only fiduciary, we should have a conversation.