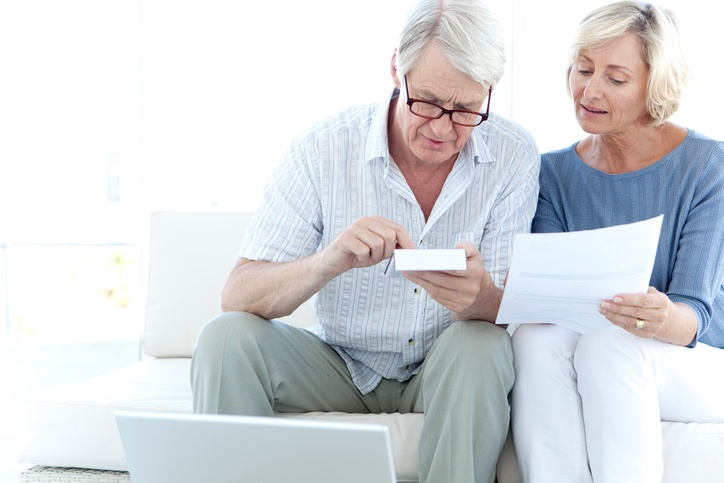 Financial Advice, Bonds, How to Build an Investment Portfolio

Because bond index construction is forced by investors who don’t want to make money, it is foolish to invest in bond index funds. Regulations force the buying and selling of more than half of the global bond supply. It means the big banks and insurance companies buy bonds for reasons other than making money. And it means you shouldn’t do it.

Unfortunately, investors missed that memo. Not only are the two largest bond mutual funds both index funds, but most new money is flowing into bond index funds!

Worse, investors in the largest bond funds aren’t even keeping up with the index!

There are 5 things you need to know about bonds:

Most Bond Owners Aren’t Even Trying to Make Money

I know it’s hard to believe, but, especially after the financial crisis, more than half of bond owners don’t have economic motives. In other words, they own bonds for reasons other than making money! Sounds complicated, but it’s not. It’s because of government regulations.

Spending two days in New York in May with a fixed income manager really drove this home. Central banks, commercial banks and insurance companies buy and sell bonds to satisfy rules and regulations that have nothing to do with making money. And this means the last thing you should do is copy what they do!

It’s worth repeating: More than half of the $102 trillion global bond market is controlled by Central banks, commercial banks and insurance companies whose primary motive is something other than making money when they purchase bonds!

Below is a graphic of the myriad of rules and regulations affecting the global bond market. Don’t’ worry if you don’t understand this. All you need to understand is that it is confusing and it’s what drives the non-economic behavior of the big banks and insurance companies.

I have good news: Most other investors don’t understand it either. If they did, they wouldn’t buy bond indexes. But they are buying bond indexes. And that’s great news for the thinking investors!

Investors Didn’t Get the Memo!

In 2017, more than 90 percent of all inflows into bond Exchange traded funds went into index funds. The largest 30 bond mutual funds own more than $1.4 trillion.

I came back to South Carolina and did a quick study of the top 30 bond funds. The two largest bond funds are Vanguard bond index funds. These two funds have more than $300 billion in bonds.

In the last 15 years, the bond index (Morningstar U.S. Intermediate Core bond index) made 4.14 percent. And while investors can’t invest in an index, they could have invested in the Vanguard Total Bond Market Index. This fund made 3.70 percent per year, but investors in it made only 3.24 percent. That’s typical of the average bond investor experience for this period, which was 3.23 percent.

In fact, the average return investors made in the 30 largest bond funds are terrible. For the last one-, three- and five-year periods, investors made less than 1 percent per year. And for the last 10 and 15 years, only a little more than 3 percent, as shown below. 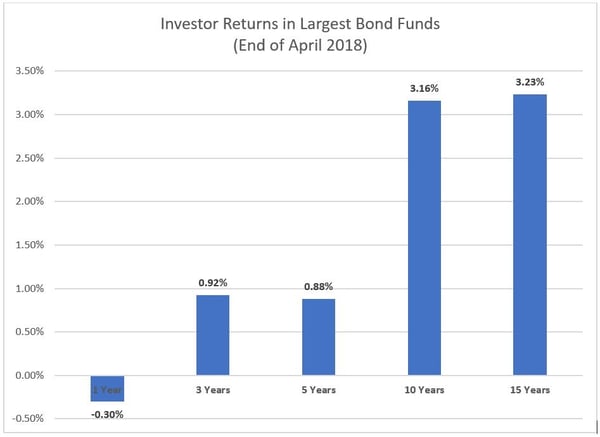 These larger bond funds are the funds investors own in their company 401ks; the bond funds they are buying on their own; and in fact, the bonds that most advisors are using. It includes the Vanguard Total Bond market indexes, Dodge and Cox Income and other well-known funds that are probably in your company 401k or IRA.

There’s A Lot of Room for Improvement

Noteworthy is that flexible bond managers, with flexibility to buy across geographies and to choose what type of bonds to buy, did significantly better. For example, in the last 10 years, the Pimco Income fund made 8.96 percent per year. However, owners of the fund (many of whom were chasing performance) only made 4.84 percent. Moreover, that fund is now more than $112 billion in size. Not to disparage the excellent management of this fund, but when funds get large, investors should always be concerned about returns falling (and risk increasing).

You may remember when we warned you, late in 2016, that we believed simulative fiscal policy would likely lead to rising rates. After we did, we repositioned bond portfolios. This has been working better than we expected. Don’t get me wrong, I’m not calling what will happen in the short term. But longer term, I believe we need to face the fact that rates are likely to rise.

In a recent blog, I talked about some of the reasons this is important. Because the outlook for traditional bonds is not good. Rates fell from 1980 to November 2016. But since then, they have been rising. And while much of the quick rise may be behind us, that is not a certainty.

First, mortgage backed securities were issued to poor credit quality homeowners whose credit has improved. Banks are forced to sell these. We can buy them.

Second, banks can no longer lend to private companies. This creates an opportunity to get equity-like returns with substantially less risk if the bond holder is willing to hold until maturity. Investors can access these through bond funds that are liquid quarterly (not daily).

Finally, volatility in bond markets creates special situations. Remember, with a $102 trillion global bond market, and more than 30,000 publicly traded companies, there are a lot of different bonds out there. Many of them are mispriced. Every day.

To learn more about how we build investment portfolios (including bonds), click here.