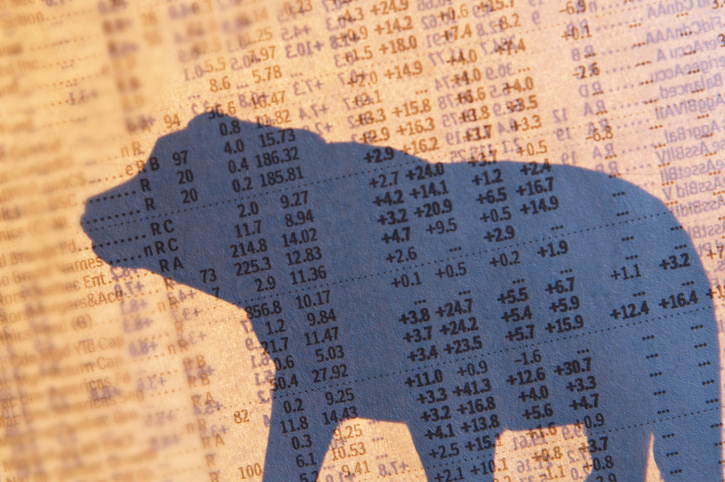 Now That We Know It’s a Bear Market, What Should We Do?

In the coming months, you are likely to hear pundits on TV talk about a bear market. The good news is most of the fundamentally sound companies have already gotten cheap.

The other good news is that the economy looks strong. For this reason, if this is a bear market, it’s likely to be a short “non-recessionary” bear market. And we have already positioned our clients to be invested in the right things, even if it doesn’t feel like it yet.

We’ll be staying on top of things.

Have a question for Global View? Contact us. We’re ready to talk.

Most of the World is in a Bear Market Already

Before addressing the bear market, let’s have a quick look at performance. Our “medium risk” funds have historically had less downside risk than indexes peak to trough. Until the fourth quarter when these funds were down but U.S. indexes were not, they didn’t look like they were working. These funds managed by Jean-Marie Eveillard Proteges Charles de Vaulx and Abhay Desphande are down 7 to 9 percent (December 19). FPA Crescent is also down more than 7 percent.

Let’s put this in context. The fund formerly managed by the legendary Jean-Marie Eveillard, under whose management there was never a negative calendar year of more than 1 percent (the fund was much smaller then), is down almost 9 percent year to date. U.S. stock indexes only began to roll over in September because the momentum stocks are the last to fall!

Our “higher risk” funds are down more than any time since 2011. Even our “low risk” funds are having some trouble this quarter, after significantly outperforming the bond aggregate all year.

Unfortunately, 2018 has been the worst year to make money in the last 15 years. It really doesn’t matter what you invested in, you are probably negative, as this chart shows:

Naturally, investors wonder if we are going into a bear market. The answer is that we’re already in a bear market. When markets fall more than 20% from a high, this is the definition of a bear market. International stocks have met that threshold. U.S. stocks are likely to follow in coming months.

And most of the S&P 500 is already in a bear market; 300 stocks in the S&P 500 are down more than 20 percent from their high mark. Without nitpicking index to index, the broader S&P and Dow are already in correction. Indexes outside of the U.S. are in bear market.

Our clients at Global View know it’s impossible to predict where (in the world) and when a bear market will happen. Their biggest fear is that a bear comes, accounts fall and they lose money they can’t make back. When investors exchange paper losses to real ones by selling, this happens. Until recently, a lot of investors, overallocated in the US, believed the market was doing fine. That’s because in the last stages of a bull market, momentum stocks do well. Until they don’t. And then they fall more than everything else.

Many investors didn’t realize that other key indexes are already down more than 20 percent. Because of this activity, two major research firms (Ned Davis and Leuthold Weeden) have said the U.S. is likely going into a bear market too. More pundits join the choir daily.

Remember, volatility creates opportunity. This means it’s no time to panic. Even more importantly, when you know it’s a bear market, it might be exactly the time you should be buying. Most investors have forgotten, but the point where many sold in 2008 was October – Jim Cramer on CNBC told them to! By November, many international stocks and small caps had already bottomed out. While it took until March 2009 for the broader U.S. indexes to bottom, the opportunity was much earlier.

But most investors didn’t buy back in until 2012. They exchanged paper losses for real losses by selling. And they lost money they could never make back. I can show you case after case after case of this happening.

What is a Bear Market and How Long Does it Take to Recover?

A bear market happens when prices fall 20 percent from a peak. Since 1936, there have been 11 bear markets in the United States.

There is no reason to expect the next bear market will be nearly as bad for investors. Morningstar tracks this data. Since 1934, bear market declines averaged from 22 percent to 51 percent (09). The two worst were 2000-2002 and 2007-2009 where some indexes were down more than 50 percent. But it is much more typical that markets are down 20 to 30 percent. Given the strength of the economy now, it seems more likely the next bear would be more in this range.

While we didn’t get a “bear market” in U.S. large stock indexes in 2011 (as measured by end of day close), most markets were in bear then. In fact, the S&P 500 index went down 21.6 percent during the day on October 4, 2011. Because it recovered by the end of the day, it was not formally called a bear.

The average bear decline (including recessionary bears) is for 13 months and spends 30 months recovering to prior bear market peak. However, non-recession bear markets last about seven months. If we do get a bear market (which may have already started) then we should expect it to bottom by April or so of 2019 unless the economy is going into recession. Fortunately, exhaustive discussions with portfolio managers and analysts lead us to believe that is extremely unlikely in the short-term.

As stated above, international and emerging markets are in a bear market already. Emerging markets have been down more than 17 percent (in bear or nearly in bear) seven times since 2010 and were down 36 percent in 2016. That’s reason to believe the opportunity in these places may be greater.

Reasons to be Positive

Without getting too technical (hang on, this is the only way to do this), Leuthold Weeden, a firm based in Minneapolis, Minnesota (it’s a long way from Wall Street engendering greater trust) has been tracking trends since 1981. Portfolio managers we admire follow their research. Leuthold says bear markets are the catalyst of one or more shifts in long-term market leadership. They believe three of four major trends broke down in October:

The remaining shoe to drop looks like it is turning over right now. Until recently, U.S. beat foreign. But it looks like this change is happening right now as foreign beats U.S. In fact, an emerging market manager we use has held up very well this quarter, flat on a one-month basis. Emerging market indexes are down half as much as the S&P 500 since its peak on September 20.

In recent conversations with portfolio managers, we began to hear excitement for the first time in a long time. Abhay Deshpande, a protégé of Jean Marie Eveillard put it this way:

“The difference between valuation in the U.S. and Outside of the US is as wide as I have ever seen it.”

He has been using cash in his fund to buy more securities in the U.S. and overseas. Spoiler alert: Abhay will be coming to a client appreciation event we’re holding in April. More on that later.

Not because we favor any region geographically but due to valuations, our “higher risk” and “medium risk” portfolio managers have been much more overweight international stocks in relation to U.S. stocks.

It goes without saying that our strategies will always avoid price momentum and overvalued securities.

In summary, the outlook for sound strategies based on sound fundamentals is better than it has been in several years. But that doesn’t mean it will be easy for the next few months, even if this market doesn’t formally get called a bear market.

We ask you to avoid false promises. This is the only way to do it folks. Magical thinking just doesn’t work. To make more tomorrow you must take the pain today.

What To Do Now

If you are our client, we have already done what needs to be done. We have made sure your asset allocation suits expected losses. We have selected fundamentally based investment strategies we believe will work in this environment (even if it doesn’t feel like they are in the short run). Most importantly, it is now, and has always been, our focus to avoid losing money that can’t be made back.

Remember, while bear markets sometimes cause recessions, as economist Paul Samuelson said, “The stock market has predicted nine of the last five recessions.” At this point, the economy is likely to slow but that doesn’t mean recession.

If your portfolio is down more than you are comfortable with, this is something we should discuss and remedy instead of reacting emotionally. This is even more important if your situation has changed due to illness or unexpected loss.

As a final note, let me once again tell you we are invested in the same securities as our clients. We look forward to this changing of the guard as an opportunity to help you achieve your goals in the next couple of decades, for you and your loved ones.